March 23, 2022
Fox News had made Alfred angry. Really angry. Fox News makes everyone angry.  On Monday, Alfred said: "Biden, Putin, Mother-fucker, cocksucker" to no one in particular.  Alfred was really, really angry. But, I'm getting ahead of myself.  I just had a short hospital stay in a local hospital for a kidney stone. It's my second stone in ten years, nearly to the day, with the last stone sending me to the hospital the day after a Bruce Springsteen concert. The previous stone also saved my life because they also found an aneurysm when they checked me for a stone.  A quick word of advice: Do not google aneurysm after finding out you have an aneurysm.  Not drinking enough water and/or eating too much salt saved my life. I like salt.  On this past Monday, let's just say " qualified personnel retrieved the latest kidney stone which I've been working on for ten years in such a way that is not polite to talk about in public " and now I have a stent again and a
Post a Comment
Read more 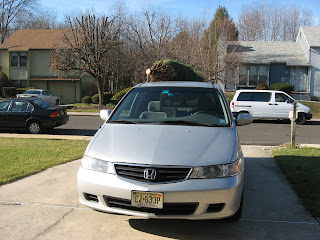 It was a sad day last Tuesday when we finally said goodbye to our '02 Silver Honda Odyssey. It was time. It had been on the automobile equivalent of life-support since Youngest son had transmission issues with it in November of '19.  The transmission is the Achilles heel of the 99-05 Honda Odyssey and we were already on our second one - it did not look like a bright future for the first car I ever bought new.  Youngest son was 8 when we purchased it in November '01 and it doesn't really occur to you then that the 8-year-old in the passenger rear captain's chair would effectively end up owning the car towards the end.  It would have also seemed far-fetched that the end of it would be an Internet auction complete with a computer-generated auctioneer voice.  We are a family of 4 but by the time the two boys were of school age we figured out that it didn't matter how many children you  personally had because boys of that age travel in packs of 6 and our 5 passenger
1 comment
Read more

January 30, 2021
tl;dr  I replaced a working 4 TB drive with a 14 TB which failed. I then fell down a ZFS rabbit hole which was a lot like work.  The details In 2017 I decided it was time for a new Ubuntu desktop and decided to embrace my inner hobbyist by building one from scratch that included 2 x 4TB mirrored ZFS disks with a useable capacity of 4 TB. This somehow turned out to be woefully short of needs and I added a standalone, "unprotected" 4 TB disk for things I considered not worth protecting like backups of other disks, temporary files, etc.  By the end of 2020, both sets of 4 TB useable storage were filling up and an upgrade was in order and a Seagate EXOS 14 TB 7200 RPM 3.5-inch drive was ordered from Amazon. The plan was to replace the 4 TB standalone with a 14 TB standalone. That was all the plan I had. 4TB becomes 14 TB, wah-la.  Somehow in the process of adding the 14 TB drive, one of the mirrored paired failed and since I now had an extra 4 TB, I replaced the failed mirror wit
Post a Comment
Read more

It has been about a year since I dumped Comcast TV and moved to Over The Air and Streaming.  I'd have to say that I was very happy with the way things were working with one exception: WPVI Channel 6.  6ABC was my white whale.  6ABC would give me a clean signal for a bit and then drop off a cliff where it was unwatchable. Sometimes it would pixelate and freeze and sometimes completely drop out. Other times it was quite fine.  Then by Thanksgiving it was consonantly unwatchable and something had to be done and the solution was unbelievably simple.  Some background: Pre-DTV, there were three bands of frequencies assigned by the FCC for Television.  The VHF band was broken into two with Channels 2-6 in the Lower half and 7-13 in the High. UHF was added later and these frequencies were much higher. If you are old enough you might recall that your TV had two antenna: Rabbit Ears for VHF and a small loop antenna for UHF.  It used to be the UHF had terrible reception and VHF was rock sol
Post a Comment
Read more

Why Xfinity Blast! is like setting $20 on fire every month

Having cut the cord last November and reduced my Comcast bill to a shadow of it's former self and thereby leaving only Blast<Exclamation Mark!> internet from my former "Triple Play" package, I was left wondering "Is the extra bandwidth that Blast<Exclamation Mark!> provides worth it.?" Spoiler alert from the title: It. Is. Not.  In a nutshell it''s the difference between bandwidth and throughput, yes I was getting 300 Mb/s according to every speed test I could find. However, that does not mean that you are going to get 300 Mb/s on every connection you make.  Think of your Internet connection as multi-lane highway with a lane for every service you connect to on the Internet. Watch a Netflix movie? That's a lane. Visit Facebook? Another lane. Your kids are watching youtube videos of cats? Another lane.  With Blast<Exclamation Mark!>, the sum of all these lanes could add up to your full bandwidth (well you and your street could - bu
Post a Comment
Read more

May 20, 2020
I type this with a banged up left hand. I have 4 stitches in my index finger between the knuckle and first joint and sliced off the tip of my left thumb. It sounds worse than it is. One of my self assigned jobs is as chief recycling container manager and on Sunday I saw boxes piling up for Tuesday's recycling and decide the best thing to do was to flatten the boxes in the container. I usually do this by taking a knife to each corner and folding them together into a single flat piece of cardboard and then the all fit in the blue container and all is right withe the world again. It was a double walled Avon box from the 1990s that did me it. The corners have double cardboard and the knife held in my right hand slipped and headed for the left. I knew it was bad but it didn't hurt - yet. I cursed and headed for the kitchen now bleeding in steady drips. The Chancellor rushed to the scene and directed me to apply direct pressure - which I was doing already in a large wad
Post a Comment
Read more 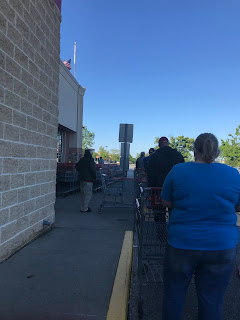 I've marked on my calendar every Tue-Thu 8-9 AM for "Over 60 time" at Costco. I figure it's a perk of my age and other than being a key demographic for future Covid-19 patient, there aren't a a lot of them. With that in mind, the Chancellor and I planned our morning walk on the way to Costco and figured we would head over and "pick up a few things" like, for example meat. We were surprised to see a line on this usually frosty May morning and debated waiting in the car versus standing in line when I decided to just wait in line while she waited in the warm car. I got in line and a younger looking woman got in line behind me. Now at this point I should fill you in on the number one think the Chancellor is doing that is making me crazy. Maybe it's the close quarters, maybe it's just too much of one another or maybe it's tinny sound coming from the iPhone speakers that sets me on edge. She plays dog videos of dog training on her phone s
Post a Comment
Read more
More posts